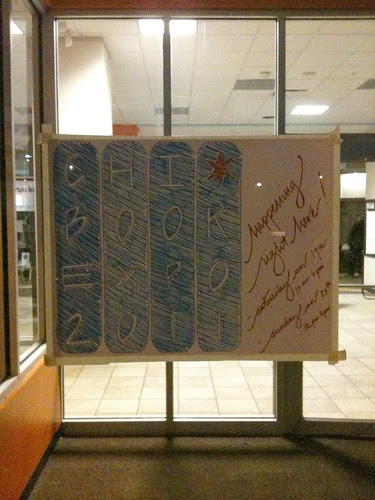 This weekend I popped by the pop-up Chicago Book Expo, sponsored by the Chicago Writers' House, which took place in what was once a book-filled Borders' store, and the building across the street (the Uptown Broadway Building) and the Goldblatt's Building, in Chicago's Uptown neighborhood. As with most things occurring in this city, I didn't hear about the event until the last minute, when the university, seeking to staff a table, put out a call for MA/MFA students willing to volunteer. (I also had never heard of the Chicago Writers' House, but such is my tiny little lot in the Windy City.)

The event took place on Saturday and Sunday, and for a quick-turnaround, ephemeral gathering, it appeared to be well-organized and attended, with small (Anobium), medium (Haymarket Books) and large (University of Chicago) presses present. A number of local authors and artists active in publishing were also there, so I got to catch up with people I hadn't seen in a while, and it also was possible to peep new issues of journals like ACM (Another Chicago Magazine), MAKE and Lift, while also discovering some I was unfamiliar with, like Chicago IRL, a fairly new queer joint featuring the work of many local creative souls. Jen Karmin, not unknown to this blog, made the smart decision to perform collaborative public selections from her sound-text collection Aaaaaaaaaaalice (Flim Forum Press), garlanding the air with poetry, adding another, aural layer to the literary cast of the space.

I left with a few books (including newly minted National Book Award for Fiction-winner Jesmyn Ward's first book, Where the Line Bleeds (Agate, 2008) and many cards and flyers in hand, and fragments of Aaaaaaaaaaalice in mind. I hope more such events pop up--and more diversity in terms of the people present and presenting would be good, just as I hope to hear about them and can attend--down the road.