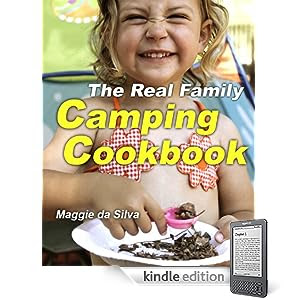 Earlier today, my partner C's company made two major announcements, both of which are worthy of the heartiest congratulations: formerly named CAC-IT, the company has now officially changed its name to CAC Digital Arts, to reflect its new projects in the digital and electronic publishing fields, and, as part of this shift, released its first e-Book, Maggie da Silva's The Real Family Camping Cookbook (2011), now available for Kindle on Amazon, the Nook on BN.com, and soon to be available for purchase on Apple's iTunes store!

Da Silva, a writer, producer, artist, and publisher of Gooch! magazine, has written, at least from what my minimal research suggests, is the most thorough e-Book compendium of camping recipes you'll find online.  The recipes range from the foolproof to more artfully elaborate options, all campsite ready with a little advanced preparation, and many designed, it seems to me, to bring as much aesthetic delight to campers of all ages as satiety. Many probably would probably also make great backyard option throughout the spring, summer and fall. Another treat are da Silva's line drawings, and the quotes that follow each of the recipes. As one Amazon reviewer notes, "It's like having a bibliography to download and bring along on your camping trip as well!"

I'm especially proud of and amazed by C for taking his company in this exciting new direction, and look forward to more e-books (of fiction, photography, travel nonfiction, and many other areas), iPhone/iPad apps, and other digital products in the future. I also highly recommend his fast news Reader (fnR) (only 99¢), which aggregates a number of popular centrist and progressive sites, like GoogleNews, Reuters, BuzzFeed, Gothamist, Wonkette, DailyKos, and Crooks and Liars, but also allows you to add any site with RSS/Atom feeds (it's extremely easy, and I added Eschaton in a matter of seconds), bookmark pages, access sharing tools, and easily forward articles.

From the moment Rahm Emanuel, formerly a senior advisor to former President Bill Clinton, US Representative from Illinois, and most recently President Barack H. Obama's Chief of Staff, announced that he was stepping down to run for the Chicago Mayor's seat occupied for the last 22 years (1989-2011, or roughly 1/2 my life, it feels strange to say!) by Richard M. Daley, I knew none of his opponents had a real chance. I predicted he'd Rahmbo Chicago, and he surely did. The money and momentum, along with the Democratic Party and the President, were Rahm's from the beginning, and the weak field he faced, which included former US Senator Carol Moseley Braun, who proceeded to self-destruct as quickly as possible; Aldermen Gerry Chico and Miguel del Valle; Carol Van Pelt Watkins; and William "Doc" Walls III, posed little challenge.  Emanuel received 55% (323,546) of the vote, tallying more than all his opponents combined.  He is now the 55th Mayor of the City of Chicago, and was sworn in today at the Pritzker Pavilion at Chicago's famous Millennium Park (Grant Park), the same site where President Obama celebrated his 2008 victory.

I'm not a fan of Emanuel's. I see him as a conventional contemporary Democrat, a centrist pragmatist who will sell out his constituents--Democrats, Republicans, independents, anyone, including the Democratic Party's union stalwarts--as quick as a lipsmack if the demand or dollar requires, and more concerned with fundraising and entrenched wealthy interests than the people who put him in office.  This struck me as his ideological orientation during his stints both with Clinton and Obama, and I see little changing, though he faces serious challenges as Chicago's mayor at a time of economic uncertainty and constrained public financial resources.  I see no sign that his promulgated reformism will go any further than cosmetic changes, at least at the beginning; if anything, the city will probably see more of a continuation of Daleyism, though with fewer--we can and should hope--of the endless scandals, and the same level of city boosterism, which under Daley included beautification, at least in some places like The Loop, that admittedly helped to transform Chicago from a shrinking metropolis to the booming Midwestern capital it is today.

Emanuel is known for being tough, sometimes to the point of thuggishness, but this might come in handy in a city like Chicago where toughness is required, especially in politics. He has already declared he's cutting $75 million from Daley's previous budget, and has been able to effect some changes concerning the Board of Aldermen, who were under Daley's thumb.  He'll likely end up using his wiles and knuckles to wring concessions and accomodation from any opposition, though the city's many problems can be screamed or threatened away. He also faced vocal hostility when he campaigned at times on Chicago's predominantly black South Side, so it remains to be seen how he will win those residents over.  Emanuel's larger vision of the city, remains unclear, at least to me, but if he can do something about the potholed streets, which have kept my car in the shop these last few years; the school system, which doesn't need any more fashionable but ineffective reforms, but a greater focus on what has led to increased NAEP scores for black and latino children around the country; and bring more jobs for middle and working-class people back to the city, he will have done more than I, at least, envisioned.

Finally, congratulations to a writer I have mentioned before here, Rey Emmanuel Andújar, whom, my friend Herbert Rogers wrote to tell me, has been named the winner in the General Story category of the Youth Poetry and Fiction Prizes for the International Festival of the Book (Feria Internacional del Libro), which I was very fortunate to have attended back in 2006. His story was entitled "UGDU."

Rey, who entered the contest under the name "Emeterio" (referring perhaps, as Herbert suggested, to Puerto Rican nationalist Ramón Emeterio Betances, whose family origins were from Hispaniola, but perhaps also playing on the resonances of the word "emeterio"), is an exceptional young writer of poetry/hip hop, fiction and plays, and will continue to be a writer to watch, follow and read.