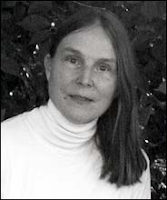 Last night at the university I heard the poet Brigit Pegeen Kelly (at right, © New York Times) read the following poem, and once I got home I checked online to see if she'd published it in a journal, since it doesn't appear in any of her books (which include the award-winning volumes To the Place of Trumpets, Song, and The Orchard. As a colleague noted, it turns out it appeared in one of the least likely places: The New York Times, as one of several poems in "Closing Time," a rare, full-page end-of-the-year collection of poetry. Other poets on the page included Yusef Komunyakaa, Carl Phillips, Seamus Heaney, and Sarah Arvio.

It is, to put it mildly, astonishing. Enjoy.