Roberto Bolaño's "Distant Star" and "By Night in Chile" 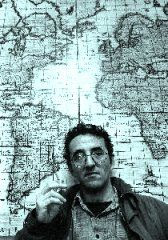 A few weeks ago, the New York Times's South American correspondent Larry Rohter penned a laudatory piece on Roberto Bolaño (1953-2003), the late, peripatetic Chilean author who, in the last decade of his brief life, achieved tremendous acclaim throughout the Spanish-speaking world as the result of a series of brilliant novels that included the Rómulo Gallegos Prize-winning Savage Detectives (Los detectives salvajes, 1998) and his magnum opus, 2666 (2004), which is set to appear soon in an English translation from Farrar Straus & Giroux. At the same time, the New Yorker, which has published little new Latin American fiction in recent years, published one of Bolaño's stories, the beguiling "Gomez Palacio."

Before Rohter's piece and the New Yorker publication, I think it's fair to say that Bolaño had gotten relatively little English-language press (to provide some unscientific evidence, Googling both "Bolaño" and "Bolano" primarily brings up Spanish-language sites) beyond reviews of his two relatively short novels, Distant Star (Estrella Distante, 1996), and By Night in Chile (Nocturno de Chile, 2000), which New York-based, longtime avant-garde publisher New Directions Publishing Corporation (who put out my novel) had published in the last few years. (They will be publishing a collection of his stories, Last Evenings on Earth and Other Stories in 2006.)

I took both of the New Directions volumes on my trip and finished both in amazement at Bolaño's talent and skill: he was--is--the real thing. Both books deal, in masterful ways, with politics, and in particular, the political situation in Chile from the years of the Allende presidency, in the early 1970s, to the military coup in 1973 (which we learned in recent years was facilitated by the United States) that put dictator General Augusto Pinochet in power. Bolaño, who was born in Chile and spent part of his childhood and adolescence in Mexico, returned just as Allende's government was underway, with the aim of promoting socialist ideals, yet after being briefly jailed under the new dictatorship, he left Chile and lived like a vagabond, ultimately settling in Spain, where he died awaiting a liver transplant. In each text, Bolaño manages to capture the perversity and deformative horror of life under the right-wing government, but in an indirect and ultimately more chilling way; the narrators of both texts are profoundly affected by what they've lived through, and in By Night in Chile, what they've actively participated in.

Taking that work first, let me say that is the finer of the two novels, mainly I think because of Bolaño's deft mastery of the narrative voice, which he sustains, in the form of an almost endless sentence, for the entire novel, creating a tour de force. At the same time, the narrative succeeds both as an fictional memoir and as an allegory. By Night in Chile records the deathbed confession of Catholic priest and respected literary critic and powerbroker Fr. Sebastián Urrutia Lacroix, a priest who we come to learn is being haunted by "the wizened youth," which we come to realize is both one of the victims of the regime and his conscious. The voice of this unreliable narrator is by turns simplistic, exalted, raging, persuasive, grating, lulling, commanding, insipid, and often dazzling, managing, like a vast net, to haul in biography, philosophy, literary criticism, and historical accounts, as well as the basic narrative elements of exposition, description and dialogue. What especially fascinates me about the text is how Bolaño, through the tide of verbiage, manages to evade the central issue for most of it, which is to say, to embody the priest's psychological, emotional and moral evasions of his actions on behalf of and in collaboration with the regime, while steadily damning him in the very process of the voice's undammable unfolding, its frantic, rear-guard work against the harsh and ultimate judgment of the condemned, the murdered and disappeared, the void--History.

In one section, Urrutia describes his mentorship by one of Chile's leading pseudonymous right-wing critics, and the submerged psychological and sexual tensions that the priest only bare staves off, in part by a process of emotional distancing and recourse to an inner poetic landscape, which Bolaño captures in the repeated phrase "Sordel, Sordello, which Sordello?" referring to the question Urrutia asks his mentor about the troubadour poet and his internal mental trigger to disengage. In another Urrutia recounts his visits, on behalf of two extremely shady Chilean characters (linked to the ultraconservative Opus Dei movement, and also to the landed interests and the dictatorship), to historic churches across Europe. Ostensibly he is looking into the problems of ecclesiastical architectural preservation, but what Bolaño provides us is one of the strangest, most elusive discursive movements I can think of in a novel I've read in recent years: Urrutia launches into a litany of the various churches and the officials he encounters, focusing less on the supposed topic of his study and more on these various clerics' falconric interests, in a tone and pace that verge on the manic, going on and on before ending in the plangent scene of Urrutia's encounter with a dying Spanish priest whose falcon Urrutia, out of mercy (or conscience or both), sets free. There is little priestly about the whole encounter, which is redolent of Duncan's "My Mother Would be a Falconress," the surface of the narrative papering over something truly creepy, and possibly evil. Moreover, Urrutia deftly slips into list the offhanded remark that he saw to some other things while traipsing around in Europe, remaining always in contact with one of the Chilean agents, and the understatement, juxtaposed with the almost maniacal account, goes off like an explosive. Later, we learn that Urrutia agreesto teach Marxist theory to Augusto Pinochet and the members of the ruling junta, and again, the priest's account succeeds in the dual task of making the bizarre sound plausible while revealing, by ellipsis, the truly horrible subterranean elements of what we know happened to those on whom Pinochet used this new-found knowledge. The novel's most shocking section, however, is based on the real account of a Chilean society woman whose American husband was engaged in horrific acts on behalf of the regime (including the assassination of Chilean envoy Orlando Letelier in Washington in 1976), and rather than giving it away, I'll say only that Bolaño so effortlessly weaves it into the tapestry of this torturous and tormented voice that by the end of the novel, the reader utterly understands the implications of the final sentence, and of the unrelenting hell that memory, and conscience, can create.

Distant Star, the older work, is a quasi-detective novel and thriller, another triumph in the literature of negation, written in the form of a collaborative writing effort that aims to present a truthful account about a shapeshifting sadistic aesthete, Carlos Wieder. This monster Wieder both figuratively and literally slides in and out of the life of the novel's narrator, and by extension, we eventually see, of history itself. He is a phantom, in the true horror sense, and a phantasm. Wieder first appears, to us and to the narrator, in two Southern Chilean poetry workshops as a young, autodidact poet named Arturo Ruiz-Tagle (Bolaño adroitly plays with names) who disdains his fellow male poets and draws in the female members, especially the two stars, the beautiful and, to our narrator and his best friend Bibiano O'Ryan, unattainable Garmendia sisters, like a magnet. Shy but confident, something awful lurks under Wieder's quiet surface, and Bolaño, in devastatingly suspenseful fashion, eventually shows us what it is just as the coup is taking place and Allende and Chile's socialist experiment go to their graves. But by this point, Wieder, having disappeared, reappears as the leader of a new avant-garde movement whose bizarre, compelling creations manage to combine both the truly marvelous, ephemeral skywriting creations of the progressive Chilean poet Raúl Zurita (whom I've written about here), transformed into something closer to the pre-Vichy ventings of Brasillach, Céline and Drieu la Rochelle, and the ultraviolent, protofascistic ideology of the Italian Futurist Filippo Marinetti. When Wieder stages his most magnificent and unspeakable stunt, Bolaño completely hits his novelistic stride and succeeds in capturing the murderousness of two decades of Chilean life in a single, symbolically charged scene of discovery and vengeance.

As Ernst Bloch notes in his famous essay on the detective novel, Bolaño, like Poe, Fontane, Mann, and others (Borges and Ricardo Piglia come immediately to mind), utilizes the detective novel genre for ulterior purposes, not simply as a means of saying exactly who Wieder is--for ultimately what is the truth of a creature of multiple identities and inhuman capacities like Wieder/Ruiz-Tagle/__?--but of bringing the process of establishing truth itself, the struggle, the search, the negotation, to light. The ending powerfully and stunningly concludes the detective story structure but conversely with a formal and narrative openness that is emblematic of the entire masterpiece.

I am definitely looking forward to the translation and publication of Bolaño's other works, especially the stories and several of the novels, including one of his earliest ones, La literatura Nazi in America (1994), and highly recommend both novels, which are available from New Directions.
Posted by John K at 11:27 AM