Today as I was battling a terrible cluster headache and prepping for my class, I heard a really engaging conversation on Chicago Public Radio WBEZ-FM's Worldview, hosted by Jerome McDonald. He's been focusing on racial issues all week, and, discussing "Racism in Mexico" today he interviewed Claudio Lomnitz, Distinguished University Professor of anthropology and historical studies at the New School University, and an authority on Mexican and Latin American history and society. A great deal of what Lomnitz talked about can be found in his excellent article "Mexico's Race Problem," which appeared in the November-December 2005 issue of the Boston Review. (He quotes intellectual Enrique Krauze claiming that the grotesquely offensive Memín Penguín caricature/cartoon figure could be "elected president" of Mexico, though Krauze obviously has forgotten that the negative response towards the Afro-Cuban (aren't all Hispanics the same?) wife of Michoacán governor Lázaro Cárdenas when he was running for his post.)

This afternoon, Lomnitz did speak quite a bit about the Penguín controversy, Mexico's myth of racial equality, and its problematic view of US racial problems, but he didn't really really address either in his on-air discussion and or in his essay the particular sociopolitical marginality of Afro-Mexicans (like Mexico's second president, Vicente Guerrero, pictured above at right), who remain invisible in both internal and external Mexican media representations, or their responses to Mexican President Vicente Fox's comments about Mexicans "taking jobs Blacks won't" and the Peguín commemoration. One thing he pointed out that I found enlightening was the role that external critiques of American racism have played, along with internal political and economic activism, in nudging the US government towards changing its state-approved racist policies; in the Peguín cartoons, there's a storyline that addresses mid-20th century US segregation, and Peguín's experiences with US racism provides the opportunity for a moment of Mexican national solidarity, overriding (erasing?) his raced representation.

Many of the Worldview "Color Complex" series interviews and discussions (on skin lightening, racism and US and Australian immigration, xenophobia in Japan, and relations between African-American and Africans, etc.) can be found on WBEZ's site. There will be a public forum from 4-6 this Saturday at Unity in Chicago, 1925 W. Thome Avenue, in Rogers Park, on this topic. 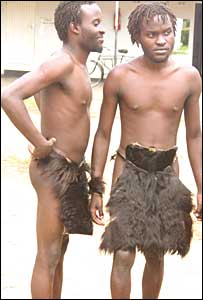 Many thanks to Prof. Byron M., who passed on a Steve Vickers BBC article, "Zimbabwe furore over loincloths," about twin brothers in that country, Tafadzwanashe and Tapiwanashe Fichani (at right, BBC from Zimbabwe Herald) who were charged with "indecent exposure" and jailed, with attendant psychological observation (!), for wearing traditional goatskin kilts (nhembes) that exposed their bare buttocks. The brothers, who're 22, claim that after their return from study in Britain (and Tafadzwanashe's brush with the British legal system) "God" urged them to reject Western clothes, implements and attitudes. God spake and they responded. Now they refuse to sit in chairs or sleep on beds, opting instead for the comfort of the floor or ground.

In addition to God, the young men are postcolonial agents with a vengeance, or as Vickers reports it

The brothers said that those who look down on them for their decision were "mentally colonised", as they were just going back to how things were before Europeans arrived in Africa.

However, these champions of cultural authenticity, traditional values and resistant performance upset some Zimbabweans who don't accept their praxis, and denounce them on the grounds of a problematic, quasi-Darwinian, quasi-Hegelian progressivist view of their country's sociocultural development:

They have reignited a debate about the place of traditional dress, but not many people in the capital are on their side.

"What they did is very disgraceful, especially to the parents," one man said.

"If human nature developed from apes, so there's development in life. So they should appreciate the development of clothes," he added.

Another woman said she thought their move was "stupid."

"I think we're advanced. We can't wear those things," she said.

"I think we're advanced"...why does she sound so unsure? Could it be the crazed dictator-qua-"president" who is still lording over her country, sending into negative territory in economic terms? The comment section offers up similar responses, with the counterargument that they should be allowed to wear "African" garb (one only person really appeared to speak of the specifics of Zimbabwe's history and internal cultures, noting that in rural areas, people wear the nhembes without harassment). So is the fact that Harare is the national capital, a site of modernity and that its residents are more focused, at least in this regard, on the demands of the external (Western/global) gaze that has criminalized these two young men's traditionalist performance? Because I wonder why contemporary clothing as well as "traditional" outfits can't coexist, as they do elsewhere? And really, what's wrong with exposed male buttocks? They're even legal in Virginia now.

The Super Bowl, the National Football League's annual championship, is rolling up this Sunday in a newly gussied up Detroit. The Pittsburgh Steelers, winner of the AFC Championship, face the Seattle Seahawks, who won the NFC trophy. This year I have no interest or stake in either team winning (or losing), and really wish both of them the best, though at the same time, since Seattle has never won a Super Bowl, it would be great to see them finally take the crown out to the northwest. 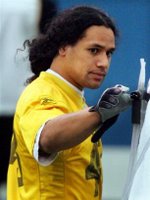 One heartwarming story involves Pittsburgh's veteran running back, thick and handsome Jerome "the Bus" Bettis (at left above, with Detroit mayor Kwame Kilpatrick, AP) scorer of 94 (91 rushing) career regular-season touchdowns and a former Ram, who may retire after this season; if he does, no matter who wins, he'll go out in his native city and a winner nonetheless. Rod 2.0, of the eagle eye, also points to another interesting angle in this match-up: the central roles played by several star Samoan players, including the luxuriously maned, stunning Steeler defensive back Troy Polamalu (at right, AP) who gets (cuz he deserves!) the lens and dap whether his helmet is on or off.

So it sounds like I'm leaning towards Pittsburgh...but I actually think Seattle will win this one, on the strength of their coaching, improved quarterback, Matt Hasselbeck, and outstanding running-back Shawn Alexander (at left, AP), who in addition to looking like the third phyne Barber brother (thanks Bernie!) set an NFL record this year with 27 regular-season touchdowns. Look for Mack Daddy to score at least one or two more this weekend.

Seattle has the offense and defense, and the determination (the hunger, if I can be dramatically clichéd) to win it all, and I think they will. Still, Pittsburgh has a very good team too, with a top defense, one of the better young QBs in the league, and a 1-2 backfield punch--does that sound like hedging?--so it ought to be a great contest.
Posted by John K at 8:09 PM