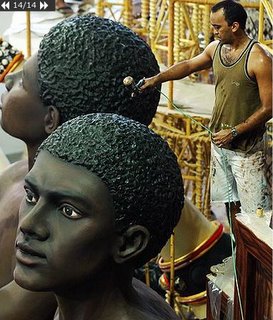 The season of pre-Lenten celebrations (which are also among the more important cultural manifestations and ritual and performative repositories, particularly in the Americas) has begun: Carnival/Mardi Gras.

Mardi Gras in New Orleans is underway, despite the absence of one of the two major sources of its Carnival traditions, Black New Orleanians. I'm of a mixed mind about this: on the one hand, I understand the desire to continue this vital tradition and am well aware of the dire financial straits the tourist-dependent city is in, but at the same time, with hundreds of thousands of Black and other poor, working and middle-class citizens still displaced from the city, can New Orleans hold a real Mardi Gras celebration? (Yes, I'm appealing to a certain notion of authenticity...) Is it too soon?

There are also Mardi Gras and Carnival celebrations now across the US, and not simply in formerly French or Spanish-colonized cities. The oldest US Mardi Gras (or Shrovetide) celebration, first held in Mobile, Alabama, dates back to 1703.

In Brazil, the chief Carnaval celebrations are taking place, as always
and in São Paulo, though Carnavals (or Carnavais) will be held in cities across the country from the far north all the way to the far south. This year, the government is giving out free condoms, which led the leading Roman Catholic archbishop of Brazil, Gerald Majella Agnelo of Salvador, to urge public moderation. Officials in Salvador itself will be distributing the "morning-after pill" free of charge.

In Trinidad and Tobago (photo at left, Christine TriniSoca Gallery), "making mas" marks one of the most important African-derived Carnival celebrations in the world and the best known in the Caribbean. The month-long season having already started, the culminating parades and performances will begin next week (February 27th and 28th).

Haiti's Carnival/Kanaval celebrations have already taken place in some cities, like Jacmel, and will continue through early next week. A number of Kanaval videos are already online. This year's events will coincide with some hopeful recent news. Last Thursday, former president René Préval was elected to a new term, after deliberation between members of the electoral council, the UN, representatives from the US and France, and other significant parties (meanwhile, his "twin," exiled ousted former president Jean-Bertrand Aristide, has signaled that he intends to return). In addition to lespwa (hope, and also the name of Préval's political party), one hopes that lapè (peace) is a central theme during this year's celebrations.

In Dominican Republic, Carnival/Carnaval doesn't start until March 4 and 5. In addition to Santo Domingo's processions and events, there is the famous, 496-year-old colorful Carnaval celebration in the provincial capital of La Vega, el Carnaval Vegano, which is particularly rich in Spanish rituals and traditions, such as the máscara (mask/masque), as the photo at left (J. Marcano) shows.

Panama's Congo Carnival, which artist and Spelman College professor Arturo Lindsay talked about at the university last year and which I blogged on, is a lively and a veritable religious and cultural matrix.

Canada's major Carnival tradition is the Quebec Winter Carnival, the biggest winter celebration in the world. It's over, having run from January 26 to February 11, 2006. Les québécois savent bien comment s'amuser à l'hiver!

European Carnivals, whose origins lie both in the pre-Christian pagan era and in Roman Catholic Lenten traditions, are also in full swing. They take place in Germany (known as Karneval/Fastnacht/Fasching, at right, Cologne Carnival), Italy (Carnivale), Denmark, the Netherlands, Spain, Belgium, and, through reverse (post-)colonial influence, in the UK (where they get going in the summer).

Sydney, Australia's Mardi Gras celebration, a gay pride extravaganza, is one of the best known outside Europe and the Americas, and gets underway in early March.
Posted by John K at 10:54 PM