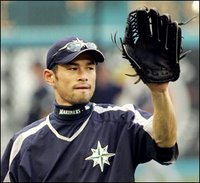 The World Baseball Classic will be featuring Cuba, and will begin in a little under a month, on March 3, 2006, with first round, round-robin games to be played in Tokyo, Phoenix, San Juan, and Orlando. The draws are as follow:

The first thing that's obvious is that pool B is the easiest of the four. The USA, unless its pitchers simply go on strike, should advance without a problem. In Pool A, Japan, which has its own professional league and bona fide stars (like Ichiro Suzuki, above right), has the best chance of advancing, but Korea actually has some very good pro pitchers as well. In Pool C, Cuba and Puerto Rico are the obvious favorites, though it remains to be seen how competitive Cuba's national team still is against the top MLB Puerto Rican MLB players (Carlos Beltrán, Carlos Delgado, Ivan Rodríguez, etc.). Panama also has some MLB stars, but not enough to keep Cuba down. In Pool D, the clear favorite is the Dominican Republic. Venezuela, which has Johan Santana, Ugueth Urbina, and other Major League stars, also should be very good, but the Dominicans have the best all-around talent outside the US in this match.

The drama surrounding NY Yankee A-Rod (at left) is over. He'll be playing infield for the US, and not the Dominican Republic, so he's probably saying a prayer of thanks every day that no games are going to be staged on Dominican soil. It could have gotten very ugly, very, very ugly... Interestingly enough, the US team will have very few American-born Latino players (Luis Gonzalez and Chad Cordero are among the other few), and not too many African-American players either. Barry Bonds, who is 42 and probably would like to avoid any additional drug tests, is sitting out the contest (though the official reason is recuperation from an injury, etc.).

About half of Italy's players are born in the US (and are from families that have been in America for 2-3 generations, like Mike "I'm Not Gay" Piazza), while the Netherlands has gathered up players of Dutch ancestry from the US as well as from its former and current Caribbean colonies, including Curaçao and Aruba. Canada will have pretty good pitching but its infield and outfield leave something to be desired.

One of the major issues will be what to do about pitchers' arms. The possibility of serious ligament and muscle damage is quite high, since most of the Major League pitchers have sat out the winter resting their arms and won't have an opportunity to tear old adhesions and get their pitching rhythms down in time. Organizers have decided to take the step of limiting pitch counts, but I'm still worried that some pitchers could seriously harm their arms. (Pedro Martínez, Dontrelle Willis, Mulder, etc., if you are reading this Blog, do NOT pitch in this thing.) 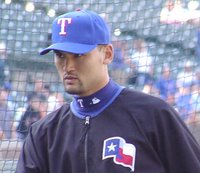 The second round games, to be played in Anaheim and San Juan (why not Santo Domingo?) pit the winners and runners-up of Groups A and B against each other, and D and C against each other. So conceivably, the US, if it gets this far, could be facing Japan and Korea (featuring Chan Ho Park at right), while DR could be facing Cuba and Puerto Rico. The finals are set to take place in San Diego at Petco Park on March 18 and 20. I'm thinking US vs. DR, though Japan vs. Cuba or some other combo isn't out of the realm of possibility.

(Oh, and the Dominican team wins the looks contest hands down.)

At the African Cup of Nations soccer tournament, all of the World Cup qualifiers but one are out. In the semifinals, tomorrow, it'll be:

Egypt vs. Senegal in Cairo
Ivory Coast vs. Nigeria in Alexandria

Egypt (represented by Ibrahem Saed, at left) is a four-time winner and the favorite over Senegal, especially playing at home, while Nigeria (featuring Jay-Jay Okocha, at right) has one of the better non-World Cup teams in the tournament. Two of the favorites, Cameroon and Tunisia (in the World Cup) were ousted in the quarterfinals.

I'd resisted posting on Jason Robida's violent attacks in the New Bedford gay bar, Puzzles, this past weekend, or his killing of his female companion and a police officer in Arkansas, which resulted in a shootout in which he was fatally wounded, in part because I figured that many other Blogs, as well as the newsmedia, would post about it. One wonders if he knew that the international headquarters for at least one major branch of the Ku Klux Klan are right near the Arkansas-Missouri border.

I was hardly surprised to learn that 1) he had neo-Nazi leanings and had openly expressed anti-Semitic and anti-Black sentiments; 2) that he had close White friends, as Jewish, (part-)Black friends and gay, who have publicly stated that they saw nothing alarming or disturbing about his pre-attack, hateful statements; 3) that he decided to act out by attacking homosexuals. Some of his "friends" have expressed surprise that he would attack gays even though he'd never expressed--to them--anti-gay sentiments.

I actually wrote about this some years ago for Chuck Tarver's Blackstripe site, and so I'm linking to my article, which is in my usual crabbed style (as was said of Seneca, "sand without lime") but should be clear enough. It's called "Convergence of Hatreds," and it dates back to my pre-university (the current one) and pre-dreadlock days (that's a looooonnnnng time ago).

And yet, as the legal scholar Patricia Williams points out in a recent Nation column, apropos of the Littleton, Colorado massacre, in so many cases, racism and other hatreds, including homophobia and heterosexism, are intimately linked. She might have spoken of Eric Rudolph, the white separatist suspected of having bombed a gay bar (and abortion clinic) in the Atlanta area, as well as of setting off a bomb at the 1996 Olympics (that killed a Black woman). Or she might have spoken of the recent spate of bombings in Britain, which targeted Asian and Black communities, as well as a gay bar in the London's Chelsea section. However, she examines the case of Jeffrey Dahmer, murderer (and cannibal) of nearly a score of young men, mostly poor and working-class African-Americans, which provides an index and cautionary tale about the dangers of racism, and homophobia, in every way. 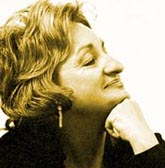 I would be remiss if I didn't post at least a link to an obituary (here's one from the National Organization of Women) of Betty Friedan (1921-2006) who was one of the major public figures in the mainstream American feminist movement for forty years. Problematic as some of Friedan's emphases, formulations and ideas were (her focus on middle-class women and the assumption that her problems and issues could be extrapolated across race and class lines, her comparison of bourgeois female alienation to Nazi camp dehumanization, her anti-lesbian attitudes, etc.), she provided part of the intellectual rationale and one of the most consistent voices pushing to end sexual and gender-based discrimination and for equal rights for women from the early 1960s on. Her effects upon the movement were and are considerable, but the tensions that her approach embodied also live on.

NOW writes about its former leader:

Friedan was NOW's president from 1966 to 1970. During that time we lobbied the federal Equal Employment Opportunity Commission to enforce laws against sex discrimination in employment, and to ban ads that were segregated by sex. We forced airlines to change their policies that permitted only female flight attendants, and required them to resign once they married or turned 32. And in a key achievement, NOW convinced President Johnson to sign an Executive Order barring sex discrimination by federal contractors. In 1968, NOW became the first national organization to endorse the legalization of abortion.