One of the highlights of my youth was working across the hall from Rita Dove (1952-), one of the great contemporary American poets. At that time she was the Poet Laureate of the US, and though I did not work for her or study under her, I did have to periodically consult with her on matters concerning a literary journal for which she served as a senior editor and which I was managing. As much by observation as by osmosis, I learned little tips and grace notes about how to deal with editors and contracts, how to navigate in the shoals of academe, and what dedication to one's art and career, within the context of the university, might look like. She was always warm and kind toward me, and though I have not had many interactions with her since, I will always remember that moment, and her and her husband, the writer Fred Viebahn, with great fondness.

My first introduction to Rita's work was Thomas and Beulah, the book that received the Pulitzer Prize in 1987. I was a senior in college, and like many, was amazed that a young Black woman writer had just won the Pulitzer in poetry--she was only the second ever, after Gwendolyn Brooks--which led me straight to the Grolier Book Shop in Cambridge to buy as many books of hers as I could afford. Her second book, Museum (Carnegie Mellon, 1983), differed from the tightly organized structure in Thomas and Beulah, a perfect volume; it was more like a conventional collection of poems, more wide-ranging in its focus, and a bit more expansive in its forms, though the sure eye and pen Rita brings to every poem in every book were evident in this one too. 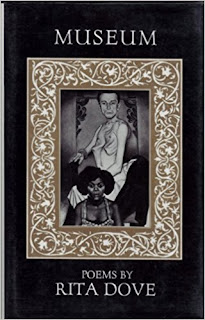 I was especially fascinated by Museum's cover image, which, it turns out was by the German painter Christian Schad (1894-1982) in the counter-Expressionist, early Weimar-era style known as the Neue Sachlichkeit, or New Objectivity. Think Max Beckmann, Georg Grosz, Otto Dix, and Rudolf Schlichter; Rita ended the collection with a poem exploring Schad's painting, the artist's process, and the figures contained within it and its depiction of difference.

This final poem, "Agosta the Winged Man and Rasha the Black Dove" is also meta-commentary in part on process and experience in writing poems, including this one, and a metonymic exploration of art-making as well. Yet again as in previous poems I've posted, this one reminds us that it is the canvas--the ground of the artwork--and the art work's subjects themselves, whose gazes are "merciless"; they see and show what the artist does not and yet does, intuitively, in the creation of the painting, and transform the artist, and the viewer, in the exchange.

"Agosta the Winged Man and Rasha the Black Dove" is a lyric poem, but it also paints a portrait, as Rita's work often does, in quick, precise, vivid strokes. There is no excess here, and yet her skill creates an aesthetic surplus, as Anne Carson once put it, of meaning. The poem itself is a model of objectivity, mirroring Schad's stylistic approach--his sharpened realism pressed beyond the observable. Yet it swerves away from mere description with notable subtlety. It also gives glimpses of a world that was on the precipice; just a decade and a half later, Berlin, and Germany, would be at war, on the cusp of one of the most abominable horrors, the Nazi Holocaust, that the human race has ever exacted on itself, and the diverse world we see in miniature here--Russian aristocrats, a Malagasy immigrant performer, Agosta himself--would be swept away with a severity and violence the poem hints at.  Look, it is saying, look closely. And note who and what are looking back at you. Pay attention. 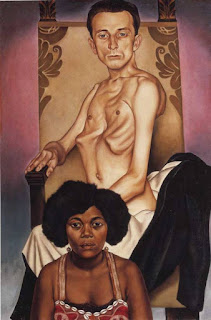