Georges Seurat's (1859-1891) 1884-86 painting "A Sunday Afternoon on the Island of La Grande Jatte," or "Sunday Afternoon on La Grande Jatte," which now hangs in the Art Institute of Chicago, may be one of the most famous and recognizable works of French art from the late 19th century Neo-Impressionist movement, and a master-work of pointillist painting. A series of carefully placed dots that in combination depict an afternoon world of (mostly) bourgeois leisure on a Seine riverbank. The picture indexes a social world, rewarding repeated viewings, even in reproduction, and provoking a range of possible interpretations.

These everyday, fin de siècle characters are in shade because of the sun, but might Seurat not be implying more? What is the little girl in white, staring directly at the viewer, saying through her steady child's gaze? There are sailboats and rowers, but also a woman fishing; how common was this, and who is she? Is this for sport or sustenance, or both? Why does the one woman with the immense bustle hold the leash to a pet...monkey? Off scene, across the river, lay the working-class suburb of Asnières-sur-Seine, which Seurat, as well as many other important 19th century French painters, including Vincent van Gogh and Claude Monet, also depicted. Lastly, there is the famous border, which inverts the colors of the painting, as if to underline the idea that another world or worlds lay just at the borders of this one.

Seurat's painting is a flash impression containing a vibrant narrative; the colors, in Impressionist fashion, pulse before our eyes. This informs the approach that Italian poet Adriano Spatola (1941-1988), known for his linguistic experimentation that often uses fragments and run-on syntax, employs in his tribute, translated by poet Paul Vangelisti, to Seurat's painting. Spatola also taps into the darker veins of the scene Seurat painting; supposedly it was a spot where middle class men could, amidst the bathing, rowing and picknicking, meet prostitutes, and that shadowy boundary between the visibly respectable and the invisible desire and vice lurking in the interstices of social relations appears in Spatola's poem in words such as "tricked out," "penance," "shadow," and "anger," among others. He records the social and emotional tenor of the scene more so than what it is overtly depicting: as poetry often can do, he holds up a lyric stethoscope to the image, and shares what he hears.

It is a beautiful image that even spurred a musical--Stephen Sondheim and James Lepine's famous 1984 musical Sunday in the Park with George--as well as numerous recreations and parodies, but also repays viewing. I did have the pleasure several times of viewing it up close, and urge visitors to Chicago first to go to the Art Institute of Chicago, one of the nation's best, but above all to spend even a little time with Seurat's painting, one of its treasures. And now, Spatola's poem:

And here is the painting: 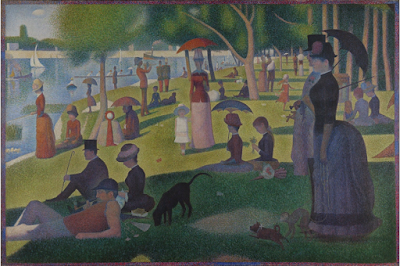 George Seurat, A Sunday on La Grande Jatte, oil on canvas, 1884-1886, © Collection of the Art Institute of Chicago.