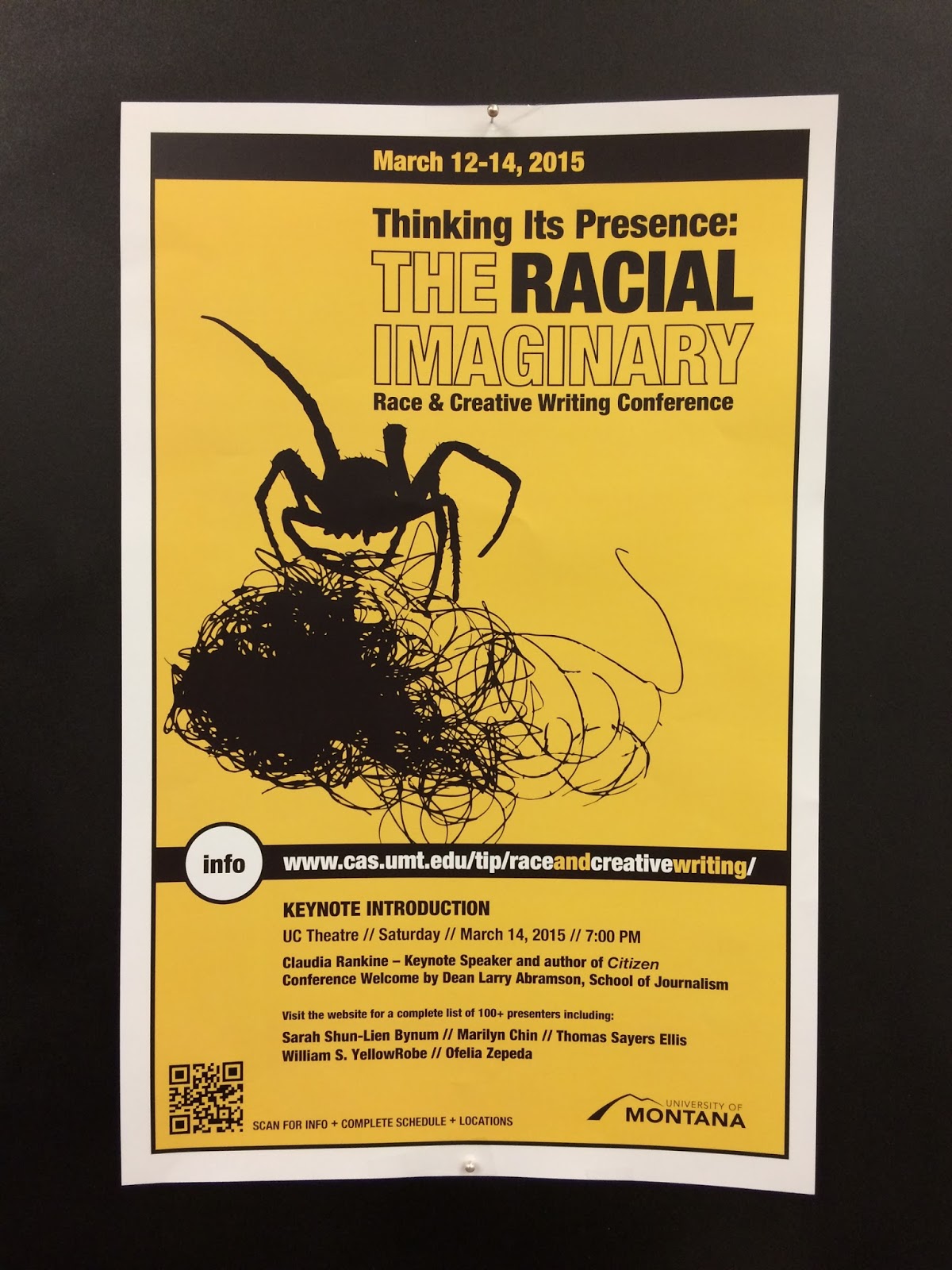 Last April, the inaugural version of a conference that was a long time in coming, Thinking Its Presence: Race and Creative Writing (TIP14), took place in Missoula, Montana. The brainchild of poet and  professor Prageeta Sharma, in conversation with scholar Dorothy Wang, and poet Joanna Klink, among others, TIP14 brought together writers, scholars, critics, and readers across racial, ethnic, religious, and genre boundaries towards dynamic conversations--as opposed to a single one--about how race, racism and white supremacy function in relation to creative writing, as pedagogy and practice, in the US and elsewhere. This is not to say that such cross-cultural conversations don't happen at other literary conferences--they do, and I am thinking in particular of activist gatherings such as Split This Rock, which I have attended and written about on this blog.

At TIP, however, which draws its title from Dorothy Wang's superb study, Thinking Its Presence: Form Race and Subjectivity in Contemporary Asian American Poetry (Stanford University Press, 2013, 2015), which adopted it from a poem by the poet Mei-Mei Berssenbrugge, what was clear last year, and even more so this year, especially as outrageous yet unsurprising racist events in the wider literary world were occurring simultaneously, was the conference's practice of active decentering whiteness as norm (and lack), and of its social, political and cultural interrogation of and pressure upon white normativities and the values and power attendant in them.

This year's iteration, Thinking Its Presence: The Racial Imaginary (TIP2015), which ran from from March 12-14, 2015, and directly grappled, in discussions that took place both inside and outside the various classrooms and auditoriums, with the discourses and ideology of whiteness as normativity, and the systems and structures that have made it so, institutionalized racism, and, in particular, the unnameable thing in our society, the ideology of white supremacy. (In concert with though not in coördination with the conference, the Boston Review published a critical forum, "Race and the Poetic Avant-Garde," curated by Dorothy and Stefania Heim and featuring eight pieces, by Dorothy, David Marriott, Lyn Hejinian, Prageeta, David Lloyd, Mónica de la Torre, Stefania, and Erica Hunt; and the Mongrel Coalition, an incisive, fearless group of poets, issued a public manifesto, "Mongrel Coalition Against Gringpo," which includes a critique of Kenneth Goldsmith's and others' shenanigans, as well as of the larger, still whitewashed avant-po-crit-world.)

One of the books that was central to this year focus was the amazing Claudia Rankine's superlative, National Book Critics Circle Award-winning collection Citizen (Graywolf Press, 2014). Citizen is one fruit of Claudia's prior, 2011 online "Open Letter" project, which provided a space for writers and readers to recount and explore, as TIP2015's abstract points out, "art’s failure, thus far, to adequately imagine race and culture." In response to Rankine’s project, "writers [have] question[ed] the effects and affects of racial difference and explore what it means for art to fail and to adequately imagine." Many of the participants in Rankine's project, which is now a Fence Books anthology, published this January and entitled The Racial Imaginary: Writers on Race In the Life of the Mind, edited by Claudia, Beth Loffreda and Max King, participated in TIP2015, as did a number of other writers who were not present last year. Among the featured writers new to the conference were Sarah Shun-lien Bynum, Marilyn Chin, Thomas Sayers Ellis, William S. YellowRobe, and Ofelia Zepeda, and figures honored and invoked through panels and discussion during the conference included Wanda Coleman, Amiri Baraka, Stuart Hall, and Fred Ho.
I should note that although I ended up participating in four different events, I was not sure, as late as the beginning of March, that I would be able to attend, based on the state of my knees. I received medical clearance to fly and to participate but had to take it much easier than I would have, so though I ended up walking some days as much as 4 miles (!), there were no traipses, like last year's, along the Clark Fork River's trails or jaunts back and forth between Montana's beautiful mountain-trimmed campus and the easily walkable downtown area. On the other hand, I was very happy to be on my feet and healing in real time, and not to have to resort to being ferried about constantly. I felt considerably more scattered than I usually do at such gatherings, though, and was still in significant pain throughout, so my apologies to anyone to whom I seemed air-headed, short or impolite.
I was able to walk from the hotel to my first event, a Fence-sponsored reading with Ed Pavlic, whose next collection of poems, Let's Let No Yet   Inferno, to be published in Fall 2015 by Fence and which I selected for the 2014 National Poetry Series, at Missoula's Shakespeare and Company bookstore, and to remain vertical at each of my other events, including a Founders Reading with Tisa Bryant and Sherwin Bitsui, which included a Q&A afterwards led by Dorothy; a panel on race and translation organized by Jen Hofer, with James Thomas Stevens; and a response to a brilliant paper by race, racism and comic cynicism by Jess Row. I cannot praise enough the contributions all of them made. I also was very glad to be able to attend a number of the events I was not participating in, and as was the case last year, came away intellectually provoked, enriched and inspired. I did not, however, make the dance this year; I did not want to push my luck.
One of the most telling moments at the conference occurred when a white poet with whom I was chatting said that she perceived visible and palpable "fear" among the white people present. I thought about what she had described, and I read this apparent "fear" in a different way; what I saw was some emotional discomfort, sometimes expressed in body language, as caution, or hesitation, or carefulness, in speaking and acting. And I read these responses as attempts at engage with a deeper, non-normative awareness, to more carefully and critically think about their words, works and ways of being and creating in the--which is to say, our--world. This is not to say that I witnessed every white person present had an epiphany, as polite but contentious exchanges I had with members of the audience at my conversation with Jess Row made clear--one audience member suggested that all racial problems would disappear in several decades as we all became "brown," while another claimed that the problems in Brazil hinged not on race but class, as if the two were somehow inextricable. But for those few days in Missoula, I could begin to see and hear people actively working through different ways of thinking and being.

Several white (or white-racially marked) poets spoke about actively rejecting or resisting white skin privilege, though they also made quite clear that it was not merely a personal choice, but part of a larger, social and societal process and practice (or praxis) that was neither simple nor permanent, because the power inherent in white skin privilege and entitlement is vast, and the systems that endow them with such power are extremely difficult to dismantle. Alongside this, I saw levels of ease and camaraderie among many the writers of color, and intraracial-ethnic and interracial-ethnic expressions of joy at being able to share, listen, teach, learn, commiserate, interact, bond, and no longer have to explain or defend, though there was some of this too. These circuits of connection animated every space the conference occupied.
There were so many highlights I cannot catalogue them all, but you can check out the conference schedule here. A glittering array of established and emerging writers and scholars were present, and for the first time got to hear Marilyn Chin and Ofelia Zepeda read their work and to meet both writers. Marilyn's performance of "How I Got That Name" brought the house down. Another delight was catching William YellowRobe Jr.'s often hilarious play, "Native American Paranormal Society (NAPS)," and then having an opportunity to speak with the playwright and actor afterwards. The culminating event, Claudia's reading from Citizen and from The Racial Imaginary, packed the auditorium, and sparked a number of conversations afterwards. For those who could not attend, many of the panels were videotaped and will be available once the videos are archived.

Among the many people I had an opportunity to listen to and talk with, including those named above and below, were: Vidhu Aggarwal, Charles Alexander and Will Alexander (with whom I had a great lunch and chat), Lillian-Yvonne Bertram, Teresa Carmody, Mike Emmons, Tonya Foster, Todd Fredson, David Micah Greenberg, Anna Maria Hong, Luisa A. Igloria, Lisa Jarrett (thank you for the ride and great conversation!), Bhanu Kapil, Joy Katz, Ruthie Kocher, Kristin Languell, Sandra Lim, Farid Matuk, Tracie Morris (cousin!), Gar Patterson, Vanessa Place, Amanda Ngoho Reavey, Paisley Rekdal, Metta Sama, Carmen Gimenez Smith, Elissa Washuta (with whom I had a great trip to Seattle), Ronaldo Wilson (love set and match!), David Witzling, and Maggie Zurawski. This is only a small portion of the wonderful gathering of minds there, and I offer fond thoughts to and for anyone I had an opportunity to chat with and accidentally did not name! (Let me know if we chatted and I left your name out!)
One of my favorite event occurred on Friday night, at the Missoula Art Museum, when poet Thomas Sayers Ellis, my fellow Dark Room Collective member, who is a visiting professor this semester at Montana, led an ensemble, entitled Heroes Are Gang Leaders, in tribute to the late Amiri Baraka (1932-2014) and Amina Baraka, artist, dance, activist, and Amiri's widow, who is thankfully still with us. Band members included fellow Dark Roomer and poet Janice Lowe (Piano/Voice), James Brandon Lewis (Saxophone), Luke Stewart (Bass), poet Ailish Hopper, (Poet), poet Randall Horton (Poet), Margaret Morris (Voice), and Ryan Frazier (Trumpet), many of whom also participated in recording an album of Baraka tribute pieces this past year. Thomas was the impresario, conductor and, as he described himself, Head Hegro-in-Charge. The group's unique combination of blues, funk, hip hop, gogo, r&b, soul, and even classical music, with a riff on Samuel Barber's famous "Adagio"--as well as the rich trove of Baraka's poetry, dramaturgy and prose, and that of the participating poets, was extraordinary, with the second set even better than the first.
I want to end by thanking everyone--students, staff, faculty, and administrators, and the local sponsors--who made TIP2015 possible. Thank you Dorothy and Joanna, thank you to all the other board members and participants I have not mentioned by name, and an especial thanks to Aja Mujinga Sherrard, and to Prageeta Sharma, who lost their beloved father and husband, Dale Sherrard,  respectively, and who despite their tremendous grief still made this conference happen, and as smoothly as possible. Thank you many times over, and Prageeta, I and many others are eager to continue working with you to ensure that the Thinking Its Presence conference, and your vision for it, go forward.