Yesterday's post was my 1,300th! Not bad after my rather obvious but unavoidable blogging decline last of the last few years.

Let me offer my deepest thanks to everyone who made my experience--meeting with young scholars, chatting with a class, and a reading in the early afternoon--at Williams College yesterday so wonderful: thank you, faculty, students and staff!

I also realized while in the car back to the Albany airport that while I love looking at mountains, I really don't think I'd want to live on or in the midst of them, at least not during wintertime in the Northern Hemisphere. But the Berkshires wowed me nevertheless. 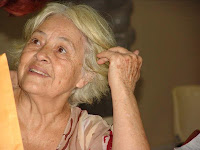 Now, to today's poem, which is by a Brazilian poet I've mentioned once on here (I searched, having thought I'd highlighted her before): Adélia Prado (1935-), a native of Divinópolis, Brazil, and a contender, year after year, for the Nobel Prize in Literature. Prado began publishing fairly late, her first book titled Bagagem (Baggage), appearing at the age of 1976. She has since published poetry, fiction, drama, and critical work, including O coração disparado (1978, winner of the Prêmio Jabuti), Soltem o cachorro (1979), Terra de Santa Cruz (1981), Poesia reunida (1991).

In 1990, Ellen Watson translated a number of Prado's poems, which Wesleyan University Press published in the volume The Alphabet in the Park:  Selected Poems. I recall checking this this book out of the library many years ago, but must admit I recall little of it except the small canvas and intimate address of Prado's poems, the way they felt like stepping through a doorway into the living room of her heart.

I found the following poem, translated by David Coles, on Antonio Miranda's website, which describes Prado as " a Catholic intimist poet who writes about the instantaneous apprehension of reality and the transformation of this reality through a critical, and yet sensual Christian experience of the world." Check out his site, and Watson's book, for more of her poems.
FATALE

The young boys' beauty pains me,
sharp-tasting like new lemons.
I seem like a decaying actress,
but armed with this knowledge, what I really am
is a woman with a powerful radar.
So when they look through me
as if to say: just stick to your own branch of the tree,
I think: beautiful, but coltish. They're no use to me.
I will wait until they acquire indecision. And I do wait.
Just when they're convinced otherwise
I have them all in my pocket.

From Poesias reunida, by Adélia Prado, Copyright © 1991.  Translation by David Coles.
Posted by John K at 9:21 AM