Sometimes I wonder if I'm going to look back on these past few years in Chicago outside of my classes as little more than a mostly endless avalanche of documents--not books of poetry or fiction or creative nonfiction or biographies written by others or even by me, etc.--that have to be read by a certain date and letters and reports and so forth that have to be produced by a certain date and endless meetings involving documents that have to be read and reports that have to be read and written and so forth...but I do know that one of the things I will not ever forget is the weather, which has never failed to surprise or stir me from the dumps. Of course there are other places where it can be in the 30s one day and 75 F the next, or in the high 40s one day and snow the next, or be cool near one's apartment and like an antechamber to the arctic just 25 blocks away and then merely chilly only a few hours later. Or so freezing and windy that you are sure you have died and are cast into you know where. But I don't live in those places and can't speak to them. Chicago's vagaries, however, I do know a bit. See for example the photo below, taken on Sunday evening. 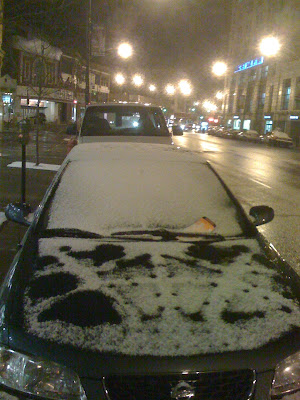 By the time I snapped the photo, the snow had stopped. A cashier in the bookstore I'd dropped into mentioned that because of the less extreme weather earlier, he hadn't even worn a coat or jacket to work, and now wasn't sure what he was going to do. I suggested he call a family member or friend to bring a jacket, or a coworker heading in to work to lend him the same. I felt so bad for him that I almost wanted to go buy him a jacket myself. Unfortunately for both of us, whatever desire I had to carry out that altruistic act was dispelled when I saw the ticket nestled in the snow atop my windshield. I guess someone has to pay for all those appealing new banners across the cityLoop area congratulating our President-Elect.

There was still a little snow on the ground but tonight the sky was clear as I walked from class to the El. I'd felt crappy earlier in the day but this evening class always picks me up. A group of students and I were heading west on Superior and one mentioned how much she enjoyed having a glass of wine when she got home from class, and the cold weather immediately made me think of mulled wine, which I will always associate with the Second Sun readings at Naïeveté Studios, and especially with Toni Asante Lightfoot (who is now the mother of Leontyn Ella Gbegan!!!-congratulations, Toni and Setondji!) and Krista Franklin. I suggested mulled wine to some of the students, a few of whom hadn't heard of it, so in honor of little Leontyn, and my great grad students, here's the recipe, from an earlier J's Theater, for mulled wine:

Mulled Red Wine (hat tips go to Toni A. L., Krista F. and James Earl H. and Donald A. for their delicious version).

2 bottles of merlot, red zinfandel or a similar wine ($5-9 range, not too cheap, not to expensive)
2/3rds cup of sugar or honey
zest from 1/2-1 orange
10 cloves
2 cinnamon sticks
1/2 cup of brandy or cognac (not too cheap)
+ non-reactive pot, muddler/spoon, non-reactive bowl/mortar, stirring spoon, mugs/coffee cups/warming cups.

1. Pour the red wine in a non-reactive pot (non-stick, tempered glass/Pyrex, stainless steel, etc.), and heat over a low flame. Avoid very cheap wines, since they grow unpalatable when heated, and avoid aluminum, which will react with the wine.
2. With a vegetable peeler, zester or paring knife, zest the orange, making sure to avoid the white backing of the peel and rind, since there's less flavor and it can be bitter.
3. Muddle (or mash with a pestle or spoon) the zest/peel, releasing the oils, in a non-reactive (glass, porcelain) bowl or mortar.
4. Add the zest/peel to the wine.
5. Stir in the sugar, making sure it dissolves, then add the cloves and cinnamon sticks.
6. Add the 1/2 cup of brandy or cognac (the better the quality, the better the taste--and it adds real bite).
7. Heat until the wine is steaming, but try not to let it boil.
8. Set it aside, let it cool, and then ladle it into mugs, and enjoy!

(And remember, if you have more than a glass, designate a responsible driver, hire a cab or hit the public transportation!)
Posted by John K at 10:09 PM