I was so elated and disoriented this morning (I went to bed at about 3 am, after relaying between the TV post-election chatfests on CNN and MSNBC and all of my favorite political websites) that I wasn't sure I would be able to get through the day, but I couldn't cancel student meetings or my class and didn't want to miss my colleagues Eula Biss's and John Bresland's reading/screening or a program event, so I headed up to the university determined to make it through until 5 pm. I must say that I wasn't fully there, and as I type this entry, I still am not. Obama's election still doesn't fully feel real, but I know that last night's results are not a mirage, and that the country--63 million Americans and counting--decisively rejected George W. Bush's and Dick Cheney's continuous disaster of an administration that has dominated the last 8 years, and took a huge leap into the future by electing Obama and Biden. Further proof of this were the vote tallies that increased the Democrats' margin in the Senate and in the House.

About five years ago, at the Evanston home of two very distinguished university colleagues, I met Barack Obama in person. He was running for the US Senate seat that he will now forgo to assume the presidency. I remember telling C after I left the event how struck I was by Obama's charm, brilliance, poise, political acumen, and vision. He spoke without notes about his aims for the position, and while he was articulating mostly standard liberal positions, he did so in a way that felt fresh and persuasive. I realized that night that Obama was going to win the Senate seat, even though he faced a field of around 6 or 7 other Democrats in the primary, and then 1 of 5 or so Republicans. He saw that he had and has that elusive it that cannot be acquired or taught. I also felt that his sense of timing was uncanny; Peter Fitzgerald's open seat was a likely Democratic pickup at the very moment when the state was turning against Bush and the war, and Illinois had already shown the nation that it was willing to make history by electing a Black candidate doing so in exemplary fashion when Carol Moseley-Braun was elected in 1992. Obama demonstrated these gifts at the Democratic convention, before a national audience, and after he won his Senate seat in a landslide, I figured he'd eventually run for the presidency, but not for a decade or more. But he realized that the clock was ticking, and launched his campaign in 2007, and the rest, as we can now say, is history.

I've met and known a few politicians and political figures in my time (one of our most recent Republican Undersecretaries of Indian Affairs is my high school classmate), but few have impressed me immediately in the way that Obama did several years ago. All of those struggles, those battles, for centuries, from the 17th century through the Abolition movement through the Civil Rights struggle and Black Power movements, the words and deeds of history's well-known and unknown fighters, were going to take symbolic and material form in someone, and yesterday, they did so in him. Certainly I've had my moments of disenchantment with his politics and fence-straddling, as I made clear when he capitulated on the FISA bill, but I remain convinced that he is an extraordinary figure. What the next four years and after will spell I cannot say, but I do know that he has the skills and talents to match the very best presidents we've had, and it'll be up to all of us, those who supported him and those who didn't, to ensure that he achieves all that he's--and we're--capable of.

I was at Grant Park (though not in the ticketed section) and was able to participate in the mass celebration, which I described to colleagues today as something akin to all of Chicago's sports teams winning at the same time, though everyone was on her or his best behavior, polite, brimming with smiles and teary eyes, laughing, saying hello and apologizing for accidental bumps, breaking into spontaneous songs and dances and cheers, almost a kind of Kantian ethical dreamworld filled not with Prussian burghers but Midwesterners of every age, color, race and ethnicity, physical status, and so on.

The official tallies claim that only 200,000 people were there, but I think far more were on the streets (Michigan Avenue, the various side streets all the way down to Congress Parkway, and west well to State) surrounding the park. Out of the thousands who went to the park, I missed some colleagues who were there, but ran into a handful of students, all as excited as I was, on the El, on the street, and at the park's edges. I'm going to post a few pictures below, and will post a video from my other camera, from which I haven't yet downloaded lots of pictures, but it was as festive an experience as I've ever had.

One thing that has tempered my ongoing elation is the news that all of the major state-based anti-gay ballot measures passed last night. In Florida (same-sex marriage ban), in Arizona (same-sex marriage ban), in Arkansas (gay adoption), and most notoriously in California, voters approved measures that would restrict or remove rights and equality for LGBTQ people. California's Proposition 8, the anti-same sex marriage amendment, did pass by a vote of 52.5% vs. 47.5%, and as CNN's exit polling suggests which should be taken with qualifications, black voters overwhelming claimed to have supported it: 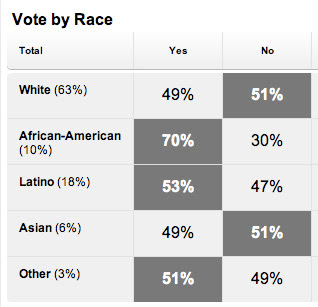 This was very disappointing news, though not exactly surprising. Although some of the most pro-LGBTQ figures in our society are Black leaders (public intellectuals, politicians, business people, etc.), and many Black people are very accepting of LGBTQ friends and family members, an issue like this California same-sex marriage ban, presented in the abstract, especially without a sustained chorus of prominent Black and other POC gay and non-gay people advocating against it, was likely to receive a homophobic backlash, and the Obama turnout had a converse effect, it appears. My first question was, what effect will this have on same-sex couples who have already married? Do those marriages stand or once this new amendment takes effect will they invalidated, even though they would be recognized in two other states (Massachusetts and Connecticut)? Can another Supreme Court ruling or a legislative act trump this referendum amendment to California's constitution?

One thing I told C is that from this day forward, one thing that all Black LGBTQ people, our Black non-LGBTQ and non-Black queer and non-queer allies must do is make a much greater effort to educate those segments of our fellow folks who still hold fast to heterosexism and homophobia. I have said and will say again that Black people are no more homophobic than any other group. At the same time, we as Black communities do have pockets of homophobia that we must address. However you feel about marriage or same-sex marriage, it is inconceivable that we should be taking away rights and legalizing civil discrimination against any of us. Black people over these hundreds of years in America have fought too hard, sweat and bled and died to secure equality, and we should absolutely not be helping in any way to further discrimination, which affects all of us, including those of us who are Black and lesbian, gay, bisexual, transgender, and queer, who want to and demand to be treated equally and fairly, by other Black people and by everyone else. So as I said, we need to redouble our efforts from today forward, however we can, to address this issue in our community, even as we strive to address homophobia in the broader American society.

I am also glad that civil rights groups are immediately challenging the Proposition 8 results in the courts. As I told colleagues today, I take consolation in the fact that yesterday's vote, particularly among the young, points to a better future in so many ways. We will have a female president sooner rather than later, as well as political and social leaders from all backgrounds, and the politics of demonization and discrimination, which the vile right wing and cowards on the left have utilized as a mechanism of power and dominance, are losing their salience. So while yesterday brought a very saddening note, I have tremendous hope for the future, our American future. A band on Michigan Avenue On Michigan Avenue, from the steps of the Art Institute of Chicago The crowd proceeding up Michigan towards Grant Park From the steps of the Art Institute of Chicago, looking south down Michigan
Posted by John K at 8:45 PM