Today in New York, Chicago, Toronto, and other cities across the US and globe, people are celebrating Lesbian, Gay Bisexual, and Transgender Pride, crowning what has been LGBTQ Pride Month. Other cities and municipalities have already held Pride celebrations, and others will be taking place throughout the summer and fall. It's been 41 years since the Stonewall Rebellion and similar uprisings, and 40 years since New York's first Gay Pride parade, which marke a new, public self-regard among gays and lesbians in the US. There have been tremendous civil, political and social advances for lesbian, gay, bisexual, and transgender people in the US and many parts of the world, but there are many more barriers to overcome, one of the most basic being complete and full equal and civil rights under the law. That, along with greater economic, political and social equality for LGBTQ people remains an issue in the US, as it does all over the world. 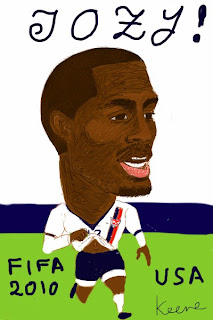 So the USA national soccer team is out of the 2010 FIFA World Cup after losing, once again, to Ghana.  The team's great but brief run included tying England 1-1 in its first game, drawing (and defeating, though the goal was denied) Slovenia in its second game, and defeating Algeria 1-0, quite dramatically, on Landon Donovan's goal in stoppage time, on Friday, to finish atop its group, C, over England. This number 1 finish in the opening round was a national first.  In the first two games, the US fell behind, only to come back--and, in the case of Slovenia, pull ahead. Facing Ghana in this Round of 16, the US again fell behind, on a defensive error, their weakest area, and went down 1-0, on a goal by Kevin Prince Boateng, until a successful penalty kick by Landon Donovan brought them even. But a tie doesn't suffice in the second round, so the US and Ghana went to overtime, and, once again, the US slipped, on another defensive misplay, when Asamoah Gyan struck on a breakaway.  The Americans couldn't come back again, falling 2-1 to the Ghanaians and out of the tournament.  At the game's start, the US team looked tentative; they appeared to lack any real strategy to press the Ghanaians, to manufacture a goal or two, or to at least expose their opponent's flaws, while the Ghanaians appeared to be relentlessly on the hunt. Yet by the beginning of the second half, the US, perhaps after a locker room dressing down, the realization that they were sending themselves home, or an emergence from 45 minutes of stupor, came out with effervescence, and kept pressing the Ghanaian defense and goalkeeper.  This led to the Ghanaian foul against Dempsey that set up Donovan's penalty kick. Jozy Altidore, Maurice Edu, Benny Feilhaber, and Dempsey all took shots on goal, but as has been the case with the US in World Cup games, they were off-target, straight at the goalkeeper, or had no followup. Sadly, there rarely seems to be a US player ready to pick up a rebound or errant ball the way Donovan did against Algeria. I'm not sure why, but it's been a recurrent problem for US teams each World Cup tournament. On top of this, the US looked exhausted by the end of the second half, and by the beginning of overtime, they were unable to connect passes or make decisive plays against the Ghanaians. They didn't give up, but it was clear that despite all their efforts, their tanks were empty.  Ghana, the only African team left in the tournament, advances to the quarterfinals.


I give a lot of credit to the US coach, Bob Bradley, and to all the players, for pushing hard in the first round. The team's determination and coherence were evident, and at times, they showed real skill in ballhandling, passing, and set plays. But they struggled to gum up their defensive flank when facing speedy opponents, convert shots on the run, or take canny kicks when the chances arose. The bad luck of receiving bad calls certainly didn't help, but they weren't alone in being stiffed (England also experienced this today), and facing Ghana, the US did have more than a few chances and couldn't convert them.

One of the things I hope the team can ground in its players for the future is the necessity of being hungry and ready all the time, from the first second the whistle blows and not just when down by a goal or two. Waiting for the perfect shot or opportunity isn't going to work against teams with superior skills or equal desire, and tentativeness as a starting principle offers no way to get beyond the round of 16 (and the US has done so, as recently as 2002) or further.  If the US's defense were stellar, they could at least aim, as Italy did a few years back, for draws followed by wins on penalty kicks, but in the absence of consistent defense, they must make a concerted effort to score at every opportunity (cf. Argentina, Germany, Portugal, etc.) One positive note is that several of the players, including defender Jonathan Spector (24); midfielders Michael Bradley (22), José Francisco Torres (22), Maurice Edu (24), and Stuart Holden (24); forwards Jozy Altidore (20) and Robbie Findlay (24); and goalie Brad Guzan (25) will probably have another shot in 2014, in BRAZIL (então espero que fiquermos lá) and there are other strong players in the pipeline. Several stalwarts, however, like Donovan (28), Dempsey (27), defender Oguchi Onyewu (28), Steve Cherundolo (31), and the Cup's best US defender, Jay DeMerit (30), probably won't be back. Nor, perhaps, will the truly world-class Tim Howard, who at 31 and with 55 caps, has probably manned his last World Cup game in goal.  This was a great ride, but the US will have to keep upping their play if they want to be real players...down south, in four years.

In today's other games, Germany throttled England 4-1 (with goals by Miroslav Klose, Lukas Podolski, and Thomas Mueller (2), to Matt Upson's lone strike), making the English defense look like a pale copy of the Americans' and sending one of the initially favored teams home with a great deal to ponder over the next four years; and Argentina rolled over the young Mexican side 3-1. Argentina, which has played with brio so far, got goals from Carlos Tévez (2) and Gonzalo Higuaín, while Mexico's sharp center forward Javier Hernández responded in the 71st minute. I have nothing against Argentina, but I was hoping the Mexicans could advance and make a strong showing. Yesterday, Uruguay, which has looked superb all tournament, defeated South Korea 2-1, to advance to the quarters, and will face Ghana, while Argentina will now face Germany. Tomorrow, Brazil faces Chile, which has looked very good, while Netherlands faces Slovakia. I pick Brazil and the Netherlands to win, but the first game will be a tight one, though Brazil will have Kaká, its major playmaker, back in the mix, and also will start the less heralded Robinho, who has been central to several of the team's goals so far.

Lastly, I'll note that several of the touted European teams are out. France had a complete intrateam meltdown that included one of its stars, Nicolas Anelka, cursing out its terrible coach, Raymond Domenech, and being sent home for doing so; the team supported Anelka, captain Patrice Evra led a boycott of a team practice, and he and his compatriots have subsequently been tarred with abuse, some of it quite racist, as a result. Italy, which won the last World Cup, in 2006 in Germany, defeating France, is also out, after lackluster--but not terrible--play. Spain and Portugal face each other on Tuesday, so one of them will also be going home (I'm rooting for Portugal to win). As I noted, the Netherlands faces Slovakia, so either "Old Europe" or "New Europe" will be advancing in its slot, only unfortunately to face Brazil or Chile.  Unsurprisingly, several of the favorites are still around: Germany, Argentina, and Uruguay. Given the draws, it could end up being an all South American final (if Paraguay, which has also looked good, goes forward), with Brazil or Chile emerging from the top half, and Argentina or Paraguay emerging at the bottom. Or not. It could end up being Ghana vs. Germany too. That would be great. Especially if Ghana finished as the first African team to win the Cup, on African soil. I'm not counting on it, though.

Addendum: On tonight's (June 2010) episode of HBO's Real Sports with Bryant Gumbel, in addition to pieces on out gay Wales rugger Gareth Thomas and young chessmasters from Brownsville, Texas, Gumbel revisited a 2005 story on racism in European football (soccer). It didn't add much new, but underlined what soccer players of color, especially black and brown ones, still face, some of it as bad or worse that what Jackie Robinson, Larry Doby, and others endured more than a half-century years ago.

A few photos from today's and yesterday's games: